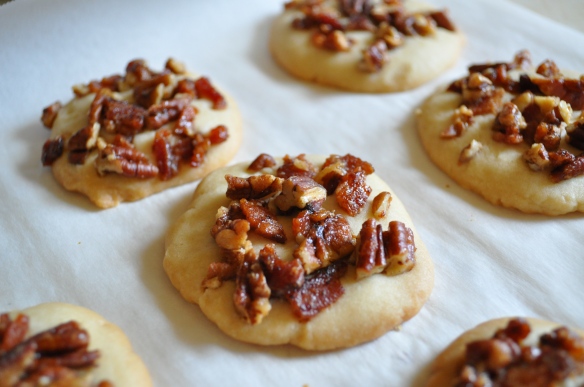 Unless you’ve been in a food coma for the past few years, you can’t have missed the trend of bacon as dessert that’s been front and center of many a blog, food mag, and tv show.  Perhaps this fascination with bacon and sugar has been around for a while, but personally, I feel like the use of bacon as a dessert ingredient really became part of the mainstream when Richard Blais wowed the judges with his bacon ice cream on the finale of Top Chef Season 4.  Guest judge Eric Ripert made no secret of his desire to steal the recipe for use at Le Bernadin and true to his word, bacon ice cream was on the menu when I dined there Fall 2008.  After that, I feel like the pig just went on a roll and hasn’t stopped since with bacon showing up everywhere and worshipped by addicts in all its forms — bacon donuts, bacon jelly, bacon cupcakes, chocolate covered bacon…you get the drift.

Yet with all that sweet love for bacon, there are surprisingly few bacon-based cookie recipes out there on the web.  To that end, I decided to solve the problem myself by dreaming up some Nutty Piggies (Maple Glazed Bacon and Pecan Shortbread Cookies).  Can you tell that I love puns?  The inspiration came from a favorite breakfast meal of pancakes with maple syrup and crispy strips of bacon. That combination of salty, sweet, and buttery was ideal for a bacon based cookie.

As a bacon aficionado myself, I’d been dreaming about making a batch of bacon cookies since last summer after munching on some chocolate covered bacon from Roni-Sue’s in New York’s Essex Market on the Lower East Side.  However, owing to a short attention span, I didn’t get around to it until Cupcake’s pre-Memorial Day BBQ a couple of weeks ago, figuring that having meat for dessert would keep up with the BBQ theme.

In deciding on a shortbread cookie, the goal was to have a cookie base that would be light and crumbly to offset the heaviness of the bacon, having already decided that at soft cookie would clash with the bacon. I also didn’t want to incorporate the bacon into the dough because the bacon might absorb some of the moisture and become chewy.  Pecans were thrown in to add another layer of  texture and flavor.  The delicious end result was a buttery cookie topped with a crisp bacon and nutty pecan mix with a hint of maple goodness.

The cookies are pretty easy to make and makes use of basic pantry staples.  I relied on Martha Stewart’s treasure trove of recipes for each component.

I made the dough the night before, following her directions, and wrapped it tightly in plastic wrap before setting it in the fridge.  For the BBQ, I made one and half times the recipe.  So 2 cups of flour and 2 cups of butter became 3 cups etc.  This quantity yielded about 4 dozen cookies of 2″-2.5″ in diameter.

For the bacon, I chose an applewood smoked bacon from Trader Joes. Berkeley Bowl did sell maple-cured bacon but flavor was just too strong for the cookie.  The applewood bacon had just the right amount of smokiness without being overbearing.  Being indecisive, I used two types of applewood bacon, uncured and dry cured. The uncured one was smokier and thicker cut and the dry cured one was saltier and fried up crispier. However, I tried each with some maple syrup and they both tasted good so I used a mix of both though you can use either or.

I cooked up about 10 pieces of bacon in total, 2 for me and 8 for the cookies. Make sure to watch the bacon while it cooks as it is important for the bacon to be crispy but not burned. Once the bacon is cooked, drain them on a paper towel and after they have cooled, then either crumble or chop the bacon into small pieces but don’t pulverize them in the size of bacon bits.

For the maple glaze, I used this recipe from Martha Stewart but omitted the cayenne pepper and thyme.  Preheat the oven to 375 degrees while you make the glaze.  Melt the butter with, brown sugar, and maple syrup along with the salt.  Once the mixture has heated up and become bubbly, turn off the heat and toss in 1 cup of chopped pecans along the bacon get a nice coat on them. You can vary the ratio of pecan to bacon to suit your carnivorous tastebuds, just keep in mind that there can be such a thing as too much bacon.

Line a cookie sheet with parchment paper (easy cleanup), spread the bacon and pecan mixture on it to a single layer and place in the oven for about 6 to 7 minutes for the glaze to start hardening. You don’t want to bake the mixture in too long because then the pecans will be completely toasted and burn when you bake the cookies.

Once the glazed bacon and pecans are out of the oven, set them aside to cool. Sure you can give it a taste but try not eat it all.

Bring out the dough about half an hour before you are ready to bake. You want it to be still cold but somewhat pliable.  Since I didn’t have room to roll out the dough and wanting to dispense with extra steps, I basically took some dough and rolled it between my palms until it formed a ball about an inch and half in diameter and then flattened it to a disc between my hands.  It is so much easier than rolling the dough and using a cookie cutter.  I laid the cookie on a cookie sheet lined with parchment paper about an inch and a half apart.  Then I took some of the bacon pecan mix and pressed it into the dough to cover the top of the cookie.

The cookies should be at least two inches in diameter because a smaller cookie does not provide enough surface area for the topping. Once you’ve filled up a tray, place the cookie sheet in the oven at 325 degrees for 13 to 18 minutes depending on the thickness of your cookie. Since my oven temperature can be squirrely, I couldn’t go by exact time but rather, looked for a golden tone to the cookie.  Once the cookies are out of the oven, let them cool before overindulging.